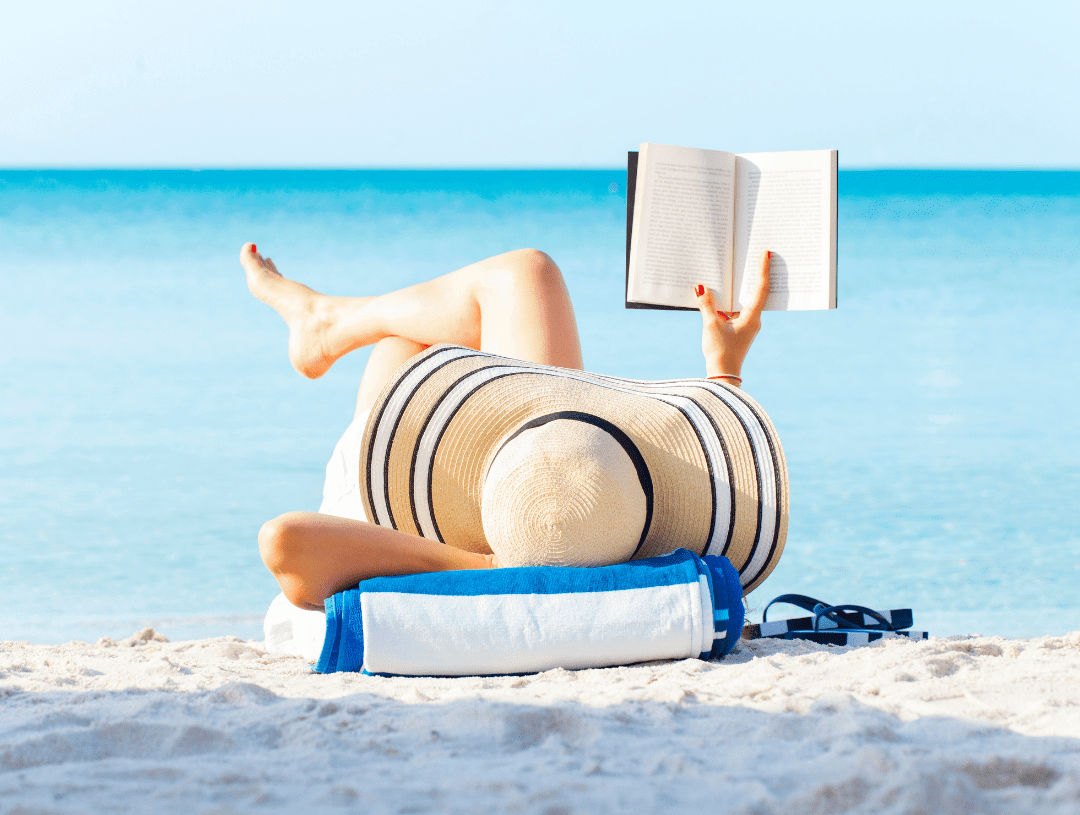 I love grabbing a great book and heading to the beach to read with the ocean breezes blowing. What better to take then Cape May beach reads. I mean books that are written about or set in Cape May. There’re actually several—some have been around for a while, and one is brand new. There are pieces of fiction, historical books and even quite a few ghost stories.

The most recent work of fiction set in Cape May, is “Thicker Than Water” by my friend Laura Quinn. It is the first in a series of three. This historically accurate book begins in 1916 during World War I and tells the tale of four young friends whose lives are entangled in unexpected ways. Laura is local to South Jersey, so she has tremendous passion about the area. You can order her book here or at the links in the bottom of the post.

Another series that features Cape May is by Claudia Vance. There are eleven books in the series, and they’re quick reads with about 130 pages per book. With titles like “Cape May Nights” and “Cape May Sunshine”, it’s clear that these are breezy and definitely feel good. Claudia is also a Jersey Girl. Buy now on Amazon

If you are looking for something a little racier, “Cape May” by Chip Cheek might be just the ticket. Set in the 1950, it is the story of a newlywed couple who are honeymooning in Cape May. Their trip is during the typically quiet off season, but they got more than they bargained for. Chip is actually a California resident, so rather curious that he chose to write about Cape May. Amazon surprisingly has a German edition also—another head scratcher. Buy now on Amazon

Another historical series is a duo by Amy M. Reade (yep Jersey again) —”Cape Menace” Buy Now on Amazon and “A Traitor Amongst Us”. Buy Now on Amazon Both are described as A Cape May Historical Mystery and are set in the late 1700’s. Amy has written several other mystery novels (not set in Cape May) and is a USA Today and Wall Street Journal best-selling author.

Are you more into reading horror type novels? (think Steven King) Then the trilogy “Twisted Branch”, Buy Now on Amazon “Dark Whispers” Buy Now on Amazon and ”Drowned Night” Buy Now on Amazon are right up your alley. Although the books list that author as Chris Blaine, they are actually a combined effort of several individuals from writers to a person who designed the layout of the fictitious Abbadon Inn  (all three books are set there) in great detail to keep it consistent, as well as come to life for the readers.

Two more mystery novels set in Cape May are “Last Exit for Betrayal” by G. W. Conklin (his first book) Buy Now on Amazon and “Murder At Exit 0” by Miles Nelson Buy Now on Amazon. You gotta love the titles! Both books are packed with intrigue, twist and turns and of course murder. Conklin grew up in the Bronx, while Nelson was from Lower Township. They both have a strong love of Cape May.

Taking a light, fun, and romantic turn—Terry Harris has written a quick lovely book “A Christmas Kiss in Cape May”, Buy Now on Amazon as well as a collection of love poems “Cape May, My Love”. Buy Now on Amazon He is local to the Cape May area and his love for Cape May certainly shines through.

The history of Cape May is topic that so many find fascinating including me! Several books have been written on the topic and a few are listed below.

“The Summer City by the Sea” and “Historic Cape May, New Jersey: The Summer City by the Sea” Buy Now on Amazon are very similar books by the same author, Emil Salvini. They depict over 200 years of the history of Cape May and how it grew to be the premier seaside destination that it is today. Many folks have given this book to Cape May lovers on their gift list, I’m sure! The pictures are one of the things that make this book a fav amongst readers.

The history as early as revolutionary times is depicted in “Cape May Through Time (America Through Time) Buy Now on Amazon by Joan Berkey and Dr. Joseph Salvatore. This book does not include pictures but does go into great historical detail including the devastating fire of 1878 that destroyed 35 acres of property. This 96-page book is a quick read historical resource.

“Victorian Cape May” Buy Now on Amazon by Robert E. Heinly as the name implies focuses on the Victorian Era in Cape May. The book describes the daily lives of those who visited Cape May as a summer destination and also the year-round residents who make it their home. If you want to be transported back in time and get the true feeling of what it was like to live in Cape May then, this is the book for you.

Did you know that South Cape May was lost to the sea? “Remembering South Cape May: The Jersey Shore Town that Vanished into the Sea (Lost)” Buy Now on Amazon relays the fascinating but brief history of this little know shore town. The author, Joseph Burcher, was himself a resident of South Cape May and tells the story with heartfelt authenticity.

I think just about everyone would agree that Craig McManus is the unrivaled authority on Cape May ghost stories. I mention several of his books in an earlier post Are there really ghosts in Cape May? “The Ghosts of Cape May Books 1, 2  and 3” Buy Now on Amazon are a must read if you want to get the spooky details of the Cape May ghost scene. As an aside, Cape May MAC also has ghost tours that are a ton of fun if you like to get the inside scoop in person.

“Cape May Haunts: Elaine’s Haunted Mansion and Other Eerie Beach Tales” by D.P Roseberry Buy Now on Amazon is another hauntingly good book that I recommend. First, I am a bit biased about it because I just love Elaine’s! However, with the assistance of psychic, Laurie Hull the author tells several takes of ghostly happenings around Cape May. It is part research and part personal experience.

Lynda Lee Macken, an author with over 30 ghost story books to her credit, brings us “Haunted Cape May”. Buy Now on Amazon Despite the name, her book goes way beyond the town to other locations such as Cape May Point and Rio Grande. With a blend of history and haunt, this is definitely a piece you would want in a haunted Cape May book collection!

Another source for Cape May books that have a Cape May focus is Exit Zero. You can purchase many of them right on site in their shop on Sunset Boulevard. One line purchases are also an option.

So, I hope I’ve given you lots of great material for your summer reading pleasure and beyond! Have I missed your favorite?  Let me know and I’ll gladly add it. Also let me know if you decide to grab one or two and what you thought!  We have several of these on our own bookshelf in Cape May. Friends, family and renters really enjoy reading about all things Cape May and I bet you do too!

Planning a Cape May Vacation 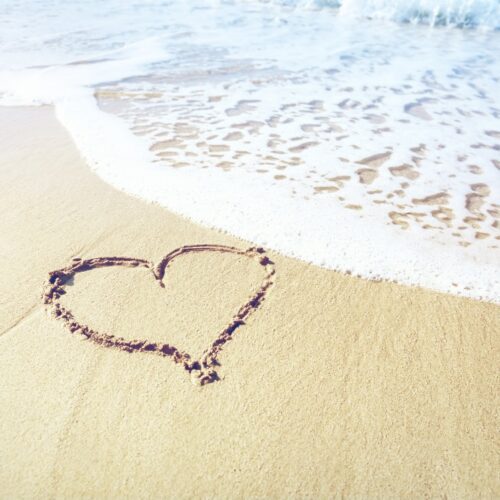 Valentine’s Day in Cape May 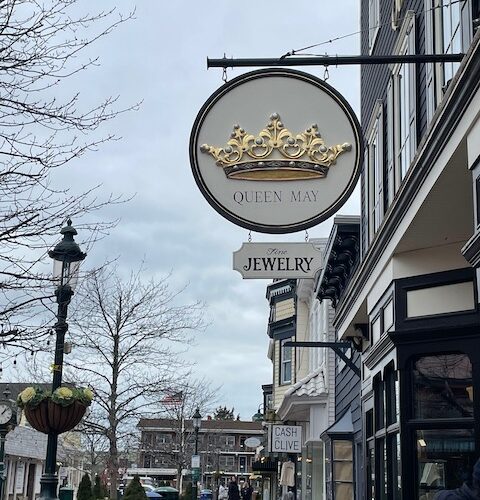 Jewelry in Cape May 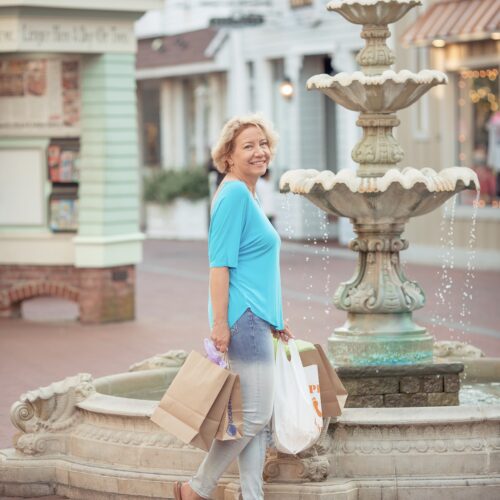 Shopping in Cape May